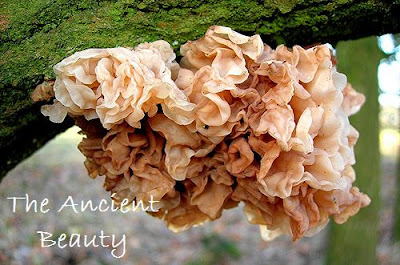 Tremella Mushroom, with its large loose lobes, is very popular in Chinese cuisine for it's healing properties and also is known to beautify the skin.

Tremella Mushroom, specifically Tremella fuciformis, also called Silver Ear Mushroom, is used in Asia as a Qi and immune tonic. Tremella mushroom is also highly prized as a youthful skin tonic for a healthy complexion. It is said that imperial Concubine Yang Guifei (719-756), considered to be the most beautiful woman in Chinese history, used tremella mushroom for her facial and body maintenance. When asked what her secret to beauty was, she stated, "Tremella Mushroom."

Tremella Mushroom, also called "White Jelly Leaf Mushroom", is a very popular medicinal mushroom used in cough syrup for treating chronic tracheitis and a number of other cough-related conditions such as asthma, dry cough and heat in the lungs in traditional Chinese medicine.

Tremella is also a powerful immune system enhancer. When compared to other potent mushroom immune boosters in two separate studies, tremella ranked first and second in effectiveness (second only to maitake mushroom).

Modern medical studies have proven that tremella is rich in protein, carbohydrates, fat, crude fiber, a variety of salts and vitamins, which contain 18 kinds of amino acids.

RADIOTHERAPY - Research in China has focused on its use to alleviate the side effects of radiotherapy and as an anti-aging supplement with over 40 Chinese patents citing it during the 1990's alone. As well as demonstrating broad immuno-modulatory activity and in vitro anti-cancer activity, tremella fuciformis' polysaccharides are considered to have a unique ability to prevent the consequences of acute radiation, restoring the blood-producing mechanism of the bone marrow. When administered at a dose of 200mg/kg for 3-5 days prior to radiotherapy they exerted a protective effect on the bone marrow caused by Cobalt-60 irradiation with myeloid granulocytes reduced to 60% of normal with tremella fuciformis polysaccharides but 20% of normal without. They also significantly increased the 30-day survival rates in mice, dogs and monkeys exposed to Cobalt-60 γ-rays.

CIRCULATORY DISORDERS - Tremella fuciformis' polysaccharides have been shown to stimulate DNA synthesis in vascular cells, the dysfunction of which is a major factor in the development of atherosclerosis, hypertension and thrombophlebitis, with therapeutic implications for these conditions. They have also been shown to protect cells from histamine damage, increase clotting time, reduce platelet adherence and blood viscosity.

NEUROLOGICAL DAMAGE - The water extract of tremella fuciformis has shown huge potential in the treatment of neurological damage. Experiments with mice have shown the ability of tremella's polysaccharides to exert an anti-aging effect by increasing the superoxide dismutase activity of the brain and liver.

MEMORY & LEARNING - Daily oral treatment with tremella fuciformis (100 or 400 mg/kg) for 14 consecutive days significantly increased learning and memory in rats. Tremella could represent a potentially useful agent that is able to improve the function of impaired cognitive processes.

Tremella Mushroom as
a beauty aid in Chinese tradition.
Tremella fuciformis has traditionally been believed to benefit the skin and 'enhance beauty', and tremella's polysaccharides have been developed for use in cosmetics on account of their excellent skin moisture retention, skin protection, flexibility and flattening effects, as well as anti-inflammatory and anti-allergic properties. Their ability to prevent senile degeneration of micro-vessels also helps maintain blood perfusion to the skin.

Cosmetic companies in France and Japan have recently begun to explore tremella's promise as a topical cosmetic aid.

• Traditionally Chinese women, including the legendary beauty Yang Guifei, have been using tremella mushroom to make the skin moist, soft and pliable. According to traditional Chinese medicine tremella mushroom nourishes the lung, stomach and kidney, strengthens the bones, helps maintain ideal weight and provides proper moisturization to the skin.

• A polysaccharide contained in tremella mushroom has an excellent water holding capacity. It can hold water equivalent to nearly 500 times its weight, which is greater than hyaluronic acid and glycerin.

• When the polysaccharide from tremella mushroom was applied to skin topically for 4 weeks, the water holding capacity of the skin and stratum corneum layer was greatly improved.

• Further research also shows that tremella works effectively as a topical antioxidant preventing oxidative damage, as well as enhancing one of the body's own powerful free-radical-fighting mechanisms, superoxide dismutase (SOD). SOD could be called a cascading antioxidant-when it neutralizes one free radical, it is then able to neutralize another.

Radiant beauty reflects “whole” health. Tremella is just one member of a family of medicinal mushrooms that offers an immeasurable array of healing and rejuvenating gifts—both from the inside and out.

My Picks!
Click on the photos for more information

Welcome To Forever Healthy and Young

Created in 2010, Forever Healthy and Young is your one stop place for up-to-date, useful, interesting information and articles on anti-aging, alternative health, longevity, beauty, and nutrition.